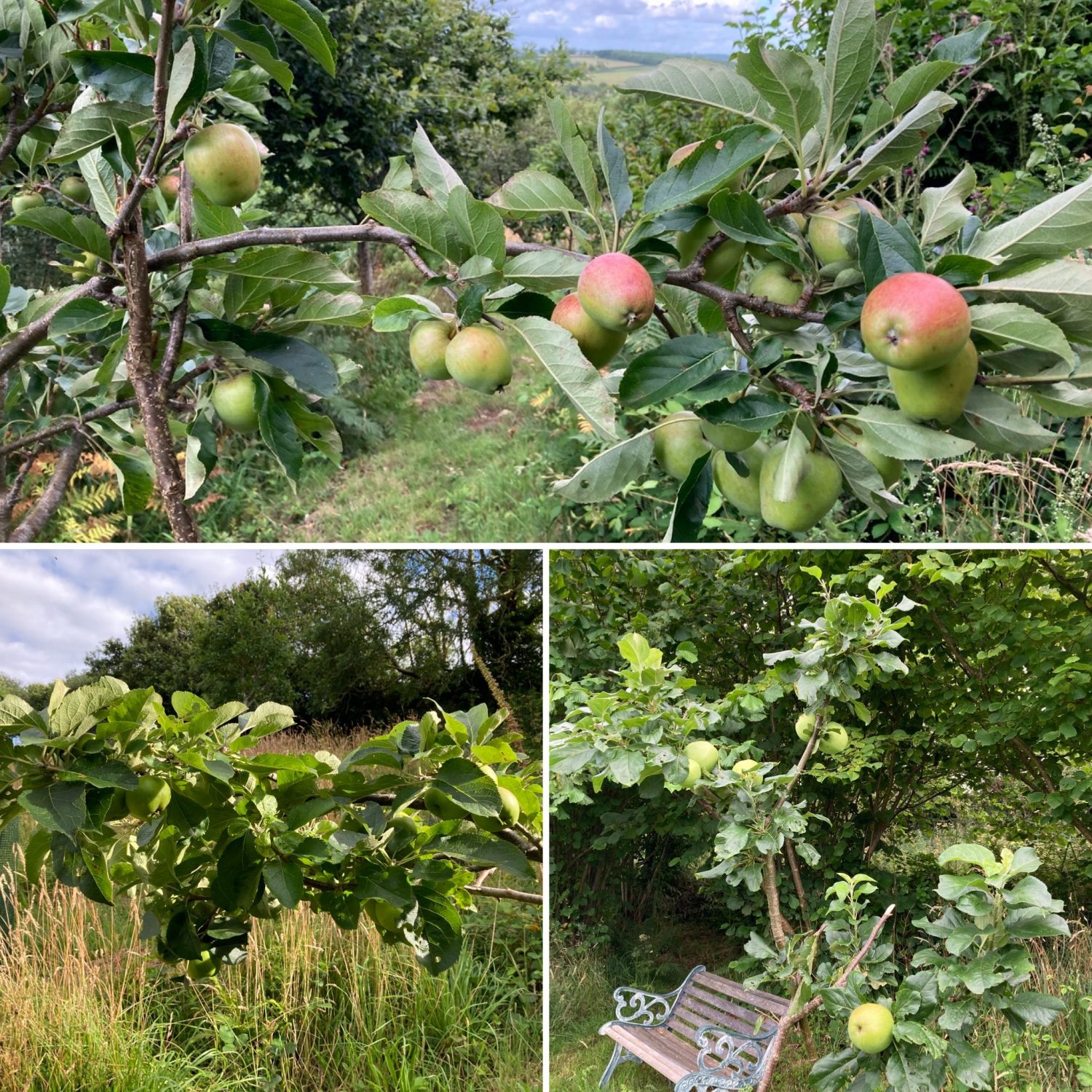 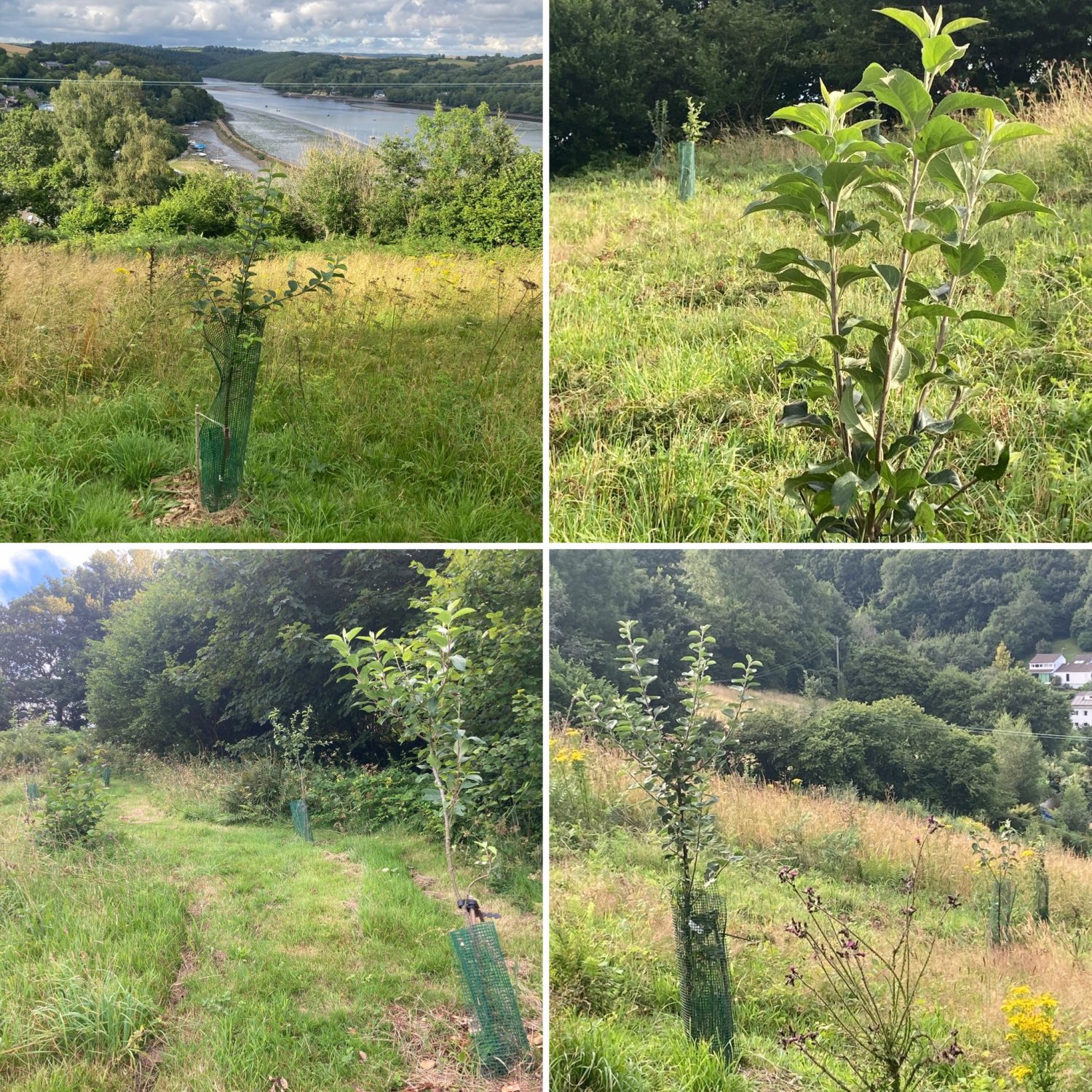 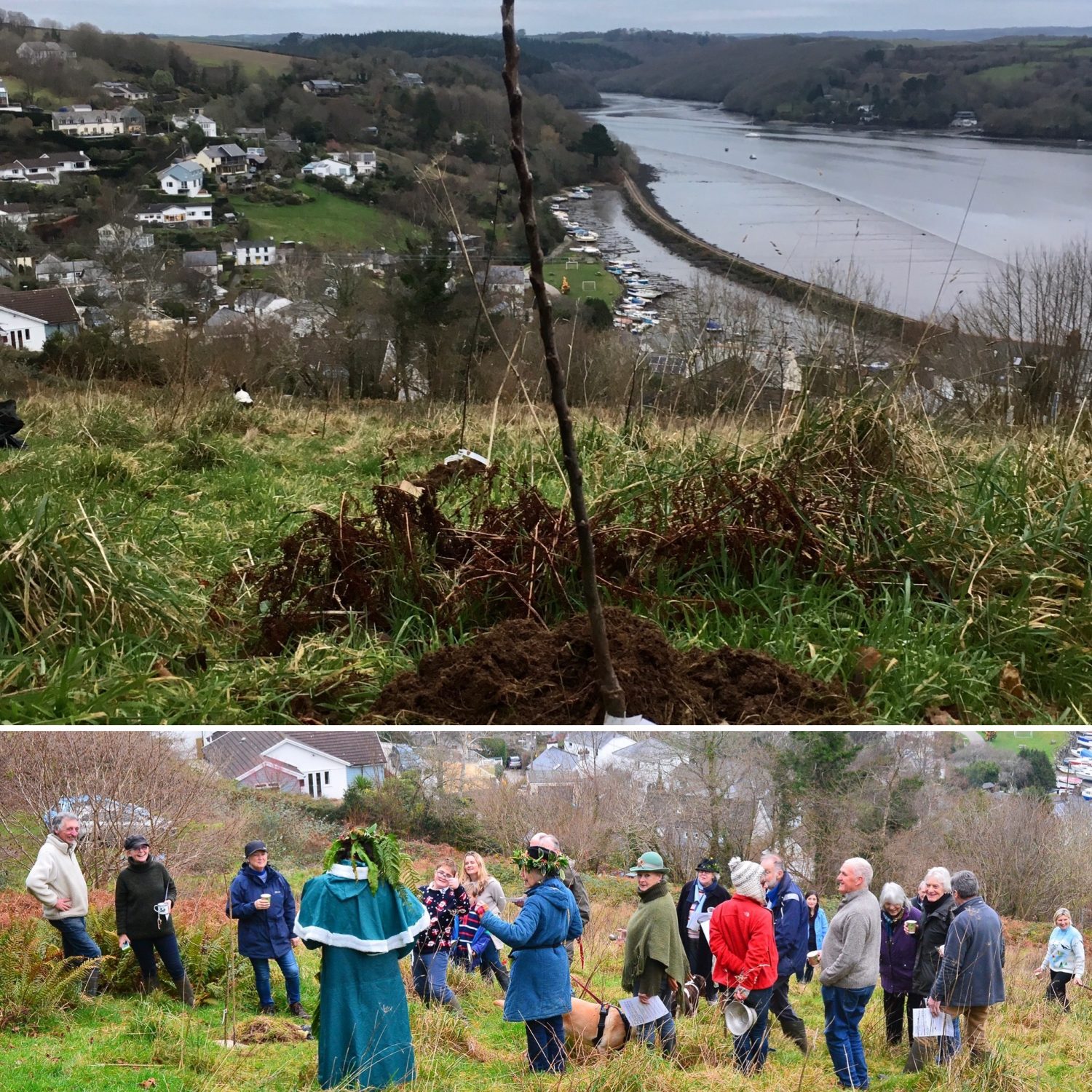 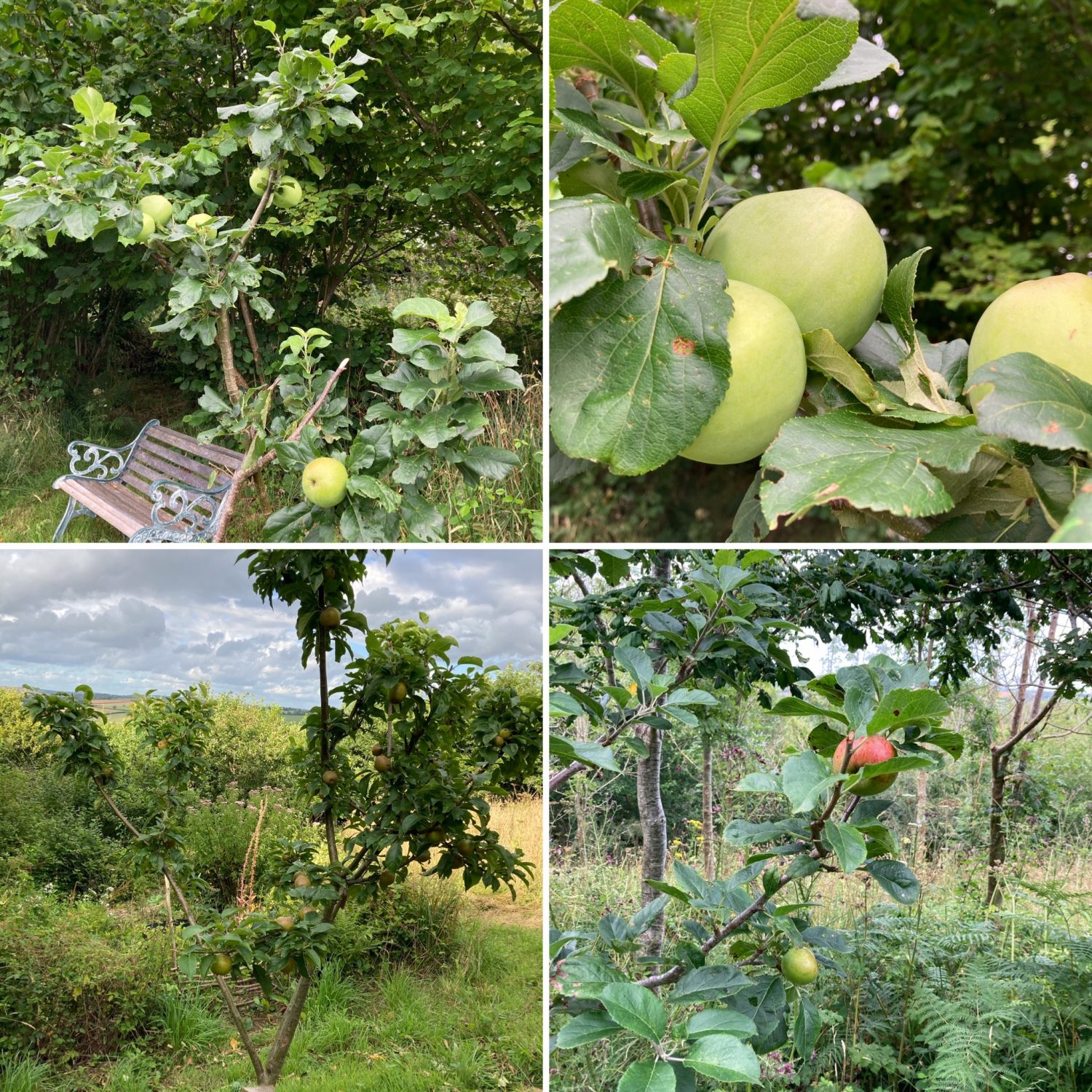 An Apple a day…

Well not quite, but with all of our new plantings over the last few years there is almost an apple for each month! We started out in our Forest Garden on the edges of glades and paths, and these trees are now rewarding us with a modest crop each year – they are all about 4 years old, and initially we chose them for their pollinating groups and their seasons, as well as for the descriptions of taste!

Last winter, however, we took a different approach with our new space, by ordering a selection of Cornish and West Country apple varieties from ‘Adam’s Apples’ (yes, really) based in Honiton. None of our land is ideal to be honest, as it is all on steep slopes and the only available site faces North East – it’s saving grace is that being near the top of the hill it gets almost constant sun during the summer months. One of the special varieties is Captain Broad – an apple that we believe was discovered in Golant, and is a cider apple. We are also going to have a go at growing Kea Plum, a variety discovered along the banks of the Fal, although plums here are a bit hit and miss!

Our idea was to plant a space which could welcome the whole village community, without sacrificing the privacy needed for running a retreat and guest house space. We enjoyed welcoming the village during lockdown by opening the site for walking and reflection, and sharing the bumper harvest of wild cherries last year, and thought it would be good to have a space that is available all year. I would like to underplant with fruit bushes and herbs (David isn’t so keen as he thinks it will play havoc with his mowing regime!) so that there is a variety of plants to use. We did think about allotments, but the field is simply too steep, and that would mean only a few could benefit, whereas this way everyone can (although some help with maintenance won’t go amiss!)

Some very generous neighbours gave us some of their Cornish varieties that they had planted in the bottom of their garden, but just didn’t thrive, so we moved them in late December 2019 and they are now doing well.

One of the quirky, apple related things that has also taken place with those donated trees, is the old custom of Wassailing. About 10 years ago, I had the idea of trying to reintroduce the festival as a way of doing something traditional based around the landscape: Golant had been famous for its apple & plum blossom, so we had a good heritage reason to try. It was a great success – on New Year’s Day we meet in the village, and walk, singing an old, local wassail song to various gardens to toast the apple trees. We are accompanied by a Green Man, and the chosen tree is given some toast to feed the birds that look after the insects, and cider is poured over the roots to ‘give back’ and then the tree is thanked for to hard work, toasted with (more) cider and pots & pans are banged to frighten away any malicious things that might harm the tree… Then we normally end up at the pub (surprise) for a final song and cider! It’s a great afternoon, and the garden hosts provide something to eat and drink at each stop….sadly, last time we were unable to meet, so we are crossing our fingers that the next one can take place.

The new trees in the ‘New Orchard’ are doing well. They were very slow, due to a very dry 5 weeks, followed by a wet, windy and cold 4 weeks. Then they have had to deal with soaring temperatures this summer, and nibbling by deer – so they will either be eaten or will be strong and robust! We are temporarily protecting them with either chicken wire or reusing strong plastic netting. My hope is to underplant a few trees with my currant & herb cuttings, on top of cardboard and compost to create a permaculture bed. We shall have to fence it for now, but thats the price you pay for open access for wildlife!

During our discussions with guests, who have joined us on our walks about the land, the subject of volunteer weekends came about. We were not sure as we are outside every day, but they pointed out that for some people who have stressful/desk bound jobs, being out of doors,  switching off and being active is something that would appeal! So we are going to schedule a few trial weekends in next year, probably towards the beginning and end of the season, as that is when most of the work is done….